I’ve just returned from an easygoing week exploring the cheese, brat and BEER loving midwest state of Wisconsin! The purpose of the trip was for my son to attend his orientation program at the University of Wisconsin, Madison where he will be starting this Fall, but being the explorers that we are, we also wanted to check out a few other Wisconsin cities to get a flavor of what summer is like in the dairy state.

Our first stop was Milwaukee, a city new to both my husband and I (which is rather strange for my Chicago-born husband, as Milwaukee is only an hour an 1/2 away from the Windy City.) My only knowledge of MKE (a moniker seen everywhere and much easier to type!) was beer and the 1970s sitcom Laverne and Shirley opening tune, otherwise I had little understanding of what makes Milwaukee tick.

Exploring with History in Mind

So the question I asked myself before I left, was what are the best ways to explore a new city creatively? I came up with a list of 10 heuristics, that I’ll share in future articles, but today, I’ll focus on one of my favorite ways to discover a cities personality – through its history.

You can start your investigation with a simple Google search, “the history of [cityname]” and see what you get. I do peruse Wikipedia, but also love browsing lesser known sites, blogs and/or content local to the area as I find the writing is honest and more insightful (especially when not sponsored by a brand!) It doesn’t take much reading, and in a few articles, I’m amazed at the overall sense of place you can feel through its historic past. With that knowledge, I then love to plan our trip, the neighborhoods and sites to see. My eventual list of possibilities inherently include touristic locations – monuments, famous buildings, etc. – but I always want to put in a few off the beaten path spots to try to see the everyday.

Touring through any theme can become an entertaining scavenger hunt game. With the key historic points in mind (i.e., MKE = BEER), my creative lens is focused on all thing relating to that topic. So, as we walked around Milwaukee, I was always on the look out for references of the cities long beer brewing history – from street signs named after famous brewers, to beer references or images. It’s amazing how much more you will see when you have just a few historic facts in mind! 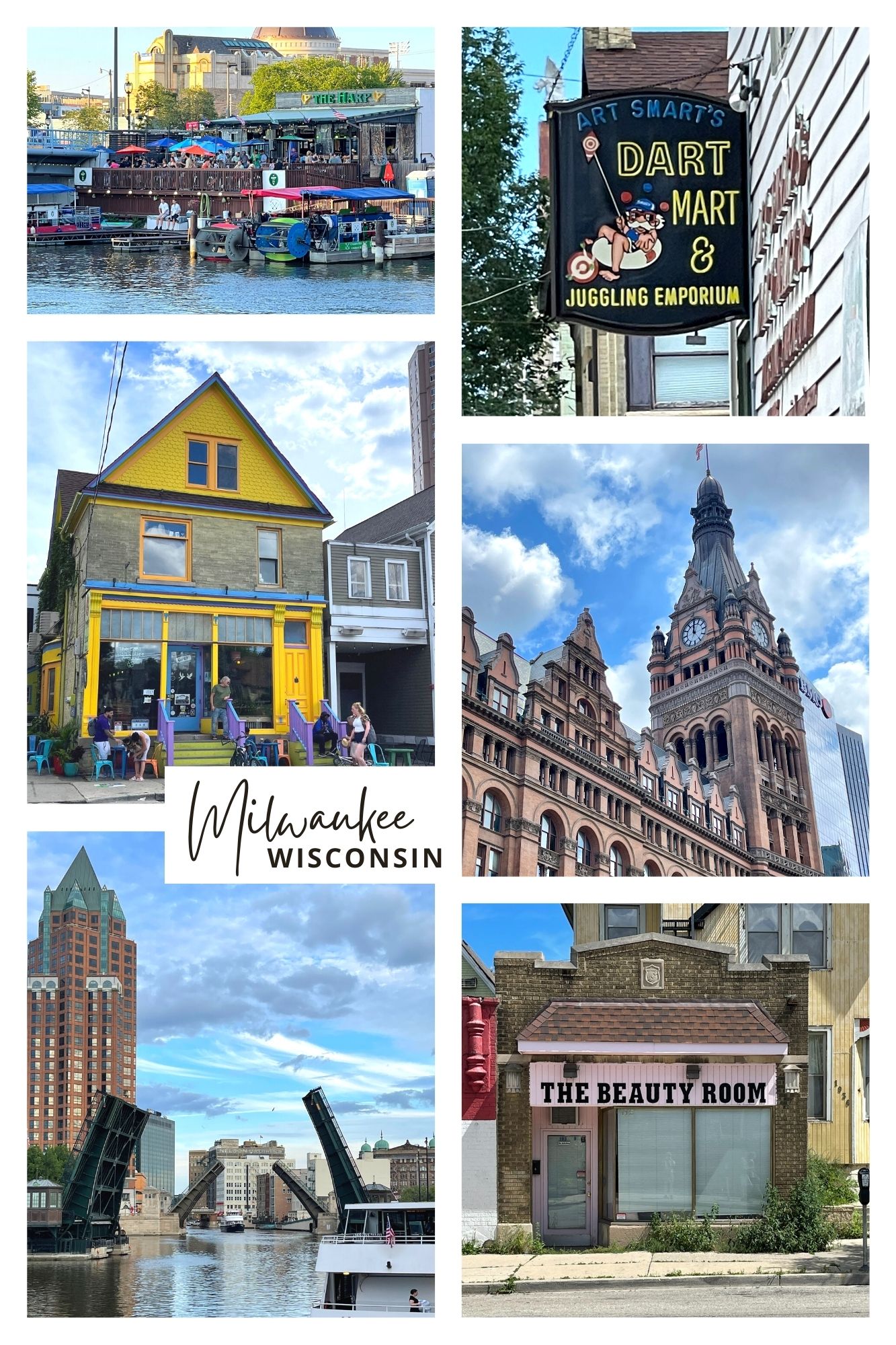 A Brief Beer History of MKE

Milwaukee was once known as the “Beer Capital of the World.” Situated along Lake Michigan and access to a plethora of wheat helped start the beer making trend, but it wasn’t until a large number of German immigrants arrived in the mid 1800s, did the brewing trend grow. Among the Germans immigrants were Frederick Miller, Joseph Schlitz, Frederick Pabst and Valentin Blatz (huh, those last names sound pretty familiar, right?)

By the latter portion of the 1800s, Germans made up more than 1/4 of the population of MKE and had instilled many of their homeland traditions including beer halls and an extensive knowledge of beer brewing. Milwaukee’s status of “beer capital” didn’t come about until the infamous fire of Chicago in 1871 that destroyed almost 1/2 of the breweries there. With a brilliant marketing plan, Schlitz rose to the occasion after the fire and responded by supplying free beer to Chicagoans, making many loyal drinkers of “Milwaukee’s famous beer.”

Beer production continued to boom for almost 100 years until the 1980s when the beer industry was shook up with mergers, bad choices and closings. Today, the only major brewery in MKE is Miller Brewing Company. Despite the lack of big names from the past, there is still plenty of incredible craft breweries, beer gardens, and beer drinking while watching the beloved Brewers play baseball. (Now that’s a lot of Bs!)  Given that, there is no shortage of beer and beer references throughout the city to discover as you tour around.

We were only in Milwaukee for 3 days, yet I definitely felt a (hoppy) taste for the city. We loved hanging out at a make shift beer garden along Lake Michigan while we watched an air show above. We also saw many folks enjoying the outdoor bars along the Milwaukee River celebrating the warm summer days listening to live music. The city also had a bubbling artsy vibe (there were 2 nights of open gallery events throughout the city) as well an amazing art museum and of course colorful street art. We left with many more things that need to be explored, so we will have to schedule a return visit when visiting my son in Wisconsin!

Get inspired by the world around you and come join me in learning how to add creativity and art to your everyday!

Get creativity in your inbox every month!

Bye bye Karl the Fog and hello to MKE via Chicago

Who's up for a little Creative Wanderlust Open Hou

I just shared some BIG NEWS in my newsletter today

Another day, another walk in the burbs. Being a ci

For over 30 years I’ve had a fascination with ca

Sketching the scene from the dock with my fav blac

And the irony is I’m actually having a productiv

Let's get creative inspiration from the sun! Here

Does the sun give you creative energy? I can defin

How will you add creativity to your weekend? Let m

Photo Prompt: Create a photo collage of what summe

A drawing prompt I offered this week was to only u

I'm here to say that it is officially the unoffici

I had the best time getting together online with m